We are hiring: Bridal Stylist Position

The Story of a Veil 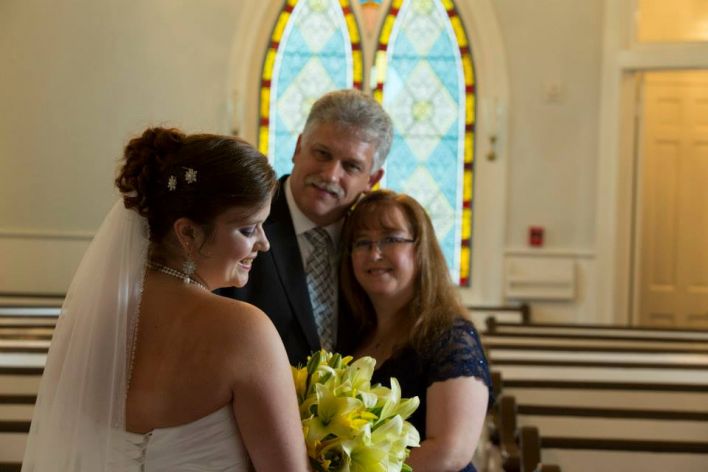 Sew tulle carefully onto a comb, and maybe add some beading or a flourish of lace. Long or short, embellished or plain, a veil is a fairly simple thing. But when it is lovingly placed in a bride’s hair, it becomes so much more. It evokes emotion and tears, and quite often in that moment the wearer truly transforms into a bride.

This is the story of one such veil. This veil, worn by more than one, became an ongoing tradition and a loving tribute to the bride who first wore it.

It all began when Amber Heath was in the 4th Grade. It was then that she met Roy Hernandez. Later, in 6th Grade, they both started playing the cello — he was always 2nd to her 1st Chair, and they became inseparable. Somewhere along the way puppy love turned into real dating, and they were still together when they graduated from Monacan High School in 2009. Amber started Hollins University the next Fall, and Roy had joined the Marines, but before he left for boot camp he proposed. She said yes.

Amber’s parents, Anne and Kevin Heath, were married in April 1987 and founded Fantasia Sound Disc Jockeys in 1988. They befriended Sharon Townsend at a bridal show when she became the new owner/manager of Tiffanys Bridal, even helping her out with some heavy lifting at her booth. Having been in the wedding business a long time, they knew Tiffanys would be one of their first stops as they planned a wedding with their daughter, but they weren’t quite ready to get started yet.

“Her dad and I insisted that she had to walk across the graduation stage before she could walk down the wedding aisle,” said Anne. That’s why Amber didn’t say “yes” to her dress at Tiffanys until March 2012. Sharon said she was thrilled when they arrived at the store, and loved working with such a lovely young lady and her delightful family. To complete the look her Godmother, Elaine Willis, purchased a crystal-trimmed veil for her from us as well.

On Saturday, June 22, 2013, a month and a day after receiving her biology degree from Hollins, Amber was escorted down the aisle at Bon Air Christian Church by her father and finally became Mrs. Hernandez.

A month later, Amber, now a bridesmaid to one of her best friends, watched the veil make another trip down the aisle. With Amber’s veil draped over her shoulders, Tiffany Sanderson became Tiffany Bridges.

Thus Amber began what would become a beautiful tradition, but tragically she wouldn’t continue that tradition herself. On July 11, 2014, Amber passed away in an unusual accident; her car came out of gear and ran over her in her driveway. Her parents were told she died instantly and did not suffer. They decided to spread her ashes at her favorite place, on The Mountain at Craig Spring Church Camp in western Virginia.

“Since Amber’s passing we have tried to do everything that we can to make sure that her life has been honored in positive ways and with purpose,” said Anne. “We have donated her cellos to the Hollins University Music Department so other young women can learn to play and we have collected funds to do improvements at Craig Springs.”

But the Heaths also wanted a meaningful gesture that could give Amber’s friends an opportunity to honor her as well. They thought of the veil and offered it to any of her friends who would like to wear it.

Only three months after her passing, Amber’s maid of honor and best friend since Kindergarten, Shannon Scott, wore the veil along with her own mother’s wedding gown. She became Shannon Barner with no wedding attendants… just Amber’s veil on her head and her friend’s presence in her heart.

Tiffanys Bride Lindsey Douglas wore Amber’s veil during her wedding reception on November 1, 2014. Jo Anne Copper, one of Amber’s college friends, wore Amber’s veil for her May 2015 wedding. Cate Moore wore it in October 2016, and then Kim Honor in December of that year. Whitney Dorman, another college friend, and Darby Marinacci, a friend of Amber’s since Kindergarten, continued the tradition in 2018. Next up is Tori Shelton in December 2019. Amber’s sister also awaits her turn, and many others have plans to make the veil part of their future weddings as well — after they find their grooms, of course!

“This story will continue for many years to come as other friends and family members wear Amber’s veil so that she can be at their weddings,” said Anne.

The Heaths have started a Facebook album filled with photos of those who have worn the veil, including Amber. The photos’ captions tell the story, and the album’s description explains that the invitation is still open to friends and family who want to wear the veil.

What started out as a simple piece of tulle has gone on to fulfill its original purpose by enhancing the beauty of these brides with its delicate features. Along the way the veil has found a greater purpose, and it now has its own beautiful story to tell about a precious life, a loving family, and the enduring impact of friendship.